Produced by a committee of volunteers with representation from the City of Ashland, the Loudonville Theater & Arts Committee, Ashland Area Convention & Visitors Bureau, Ashland City Schools and Ashland University, Ashland Chautauqua has been an institution in North Central Ohio since the beginning of the decade.

Chautauqua first came to Ashland in the summer of 2000 through the auspices of Ohio Chautauqua. The Chautauqua spirit caught hold in Ashland. Since that time, Ashland Chautauqua has become an institution in North Central Ohio and a favorite way for residents of the area to celebrate their love of history, their love of learning, and their love of simply having a good time. Its quality and popularity earned Ashland Chautauqua the Ashland Area Chamber of Commerce "Best Cultural and Entertainment Business" award in 2017.

At Ashland Chautauqua, audiences witness history in its most compelling form, first person historical portrayals. Nationally-recruited scholar/actors take on the roles of historical figures, appearing in costume and presenting exciting living history performances. Each of the scholar/actors appear in a major evening performance in character on stage at the Myers Band Shell at Brookside Park in Ashland, Ohio. Additionally, each scholar/actor presents a daytime youth program and an adult lecture workshop during their weeklong residency in Ashland County. 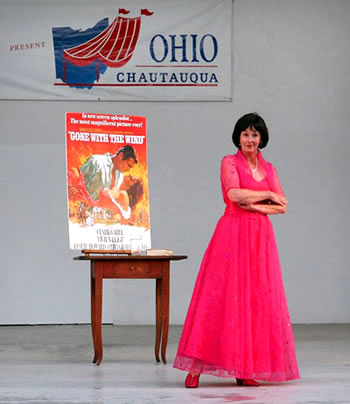